Successful ERP system implementation is not usually a result of lucky chances or convenient coincidences. The success lots of hard work, quality technology, right planning and management and most importantly, a determined team on both customer´s side and supplier´s side and that still does not cover all the factors that ensure the project´s success.

There are several methods of an international ERP system implementation management, and it hardly comes as a surprise that each method works only in certain situations and specific conditions. It is always necessary to adjust the selection of methods to a particular customer and the nature of their business. The "implementation success "itself can be perceived differently by specific project participants. To put it simply, let's say that successful ERP implementation requires zero essential deflections, observance of scope in terms of necessary company processes coverage, budget, schedule and the last but not least the achievement of the expected investment payback period.

The publications mentioned above were inspirational for a realisation of "Critical spots of ERP projects "survey (from now on referred to as "Survey "), which took place at the end of 2018 and of which results are summarised in this article. In the Survey, 30 customers and 20 experts were approached with questions regarding ERP systems implementation. Respondents on the customers' side (finished projects) were mostly project managers, senior IT specialists or senior management assistants responsible for company management. The issues were mostly related to big producing companies, companies dealing with warehouse distribution and logistics and companies dealing with engineering, projection works and construction production.

Based on worldwide surveys mentioned above, a list of the most critical factors regarding ERP systems successes was compiled. In the scope of the Survey, respondents on both sides were evaluating the factors' significance based on their experience.

Picture no. 1 shows the evaluation of the most significant factors on the supplier's side. Both customers and suppliers agree that the project's methodology and management are the key factors regarding its success. On the other hand, the most significant difference lies in the size of the implementation team. The specialists on the suppliers' side regard it as a key one as well, but customers see the influence of this factor as small or even negligible. A similar trend can be seen in the opinion regarding the fungibility of implementation team members as well.

The significance of the factors on the customer's side and their effect on a successful ERP implementation is evaluated in Picture no. 2. According to the respondents from the customers' group, the processes settings before implementation and the company's senior management's support are the key factors. Suppliers regard the level of users' training and the capacity of customisations that are to be developed into the system as the most crucial factors. Both parties see customers' entry knowledge in IT area as less essential, and suppliers do not put too much emphasis on customer's previous experience with ERP systems either. 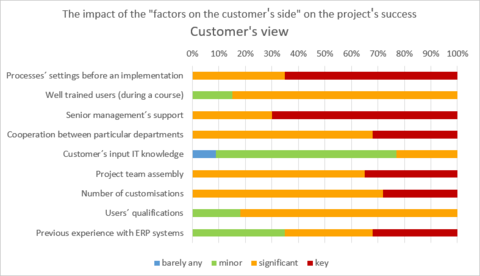 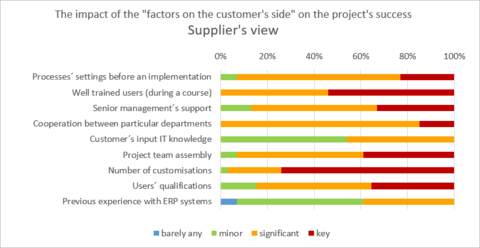 How does a supplier see it?

It is not a big surprise that the initial analysis and subsequent system proposition are coincidentally by both parties the project phases most predisposed to complications caused by human factor. According to suppliers, the insufficient end users' engagement in the project's delivery, particular stages or go-live system launch are the second riskiest project phases. According to one of the addressed consultants, the customers:

"…''underestimate the testing of entrusted agendas and often begin to take an interest in particular functionalities after the system's launch. Until then, the solutions are decided by otherwise competent, but often unconcerned users regarding future operations''."

Customers did not mention this factor in any case.

The specialists on the suppliers' side were asked about the projects' most commonly occurring "killer-factors ". In the scope of open questions, the most occurring factors were:

Within the Survey, only two "external "factors, which affect the progress of many projects and require adaptation from both customers and suppliers without an option to anyhow affect the changes, were identified. These changes are of a systém nature and are done by the producer (e.g.change in technology or logic regarding vydávání new system version's release) and release of crucial legislative adjustments done by the state.

How does a customer see it?

At the beginning of the Survey, customers were invited to evaluate the overall course and results of ERP implementation in their companies. The project's progress was assessed on a scale:

The result can be seen in Picture no. 3. Nearly two-thirds evaluated the projects in their companies with "minor complications".

Despite a significant degree of emotions, that are usually present during every implementation, no customer, after some time, did evaluate the project's progress as "very complicated". All respondents/customers expressed satisfaction about the project's results with a minor (67%) or major objections (33%). 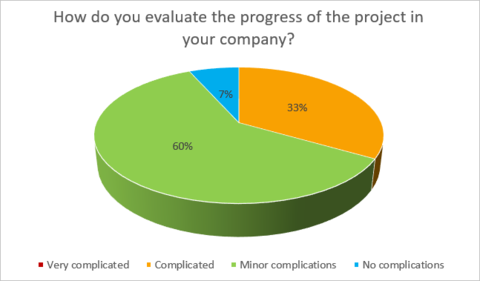 Also, the respondents were evaluating the significance of pre-defined factors, which represent rather characteristic traits, or activities done within a typical project and influencing realisation phases. Those traits were, from the perspective of the project's successfulness, arranged from the most important as follows (for comparison, the order from suppliers' perspective is stated in brackets)

An implementation of a new ERP system, alternatively an extensive upgrade of the existing one, is demanding and always, a streak of specific situations, which can affect the functioning of both customer and supplier, occurs. No matter which team you play for, always remember, that the project's excellent result depends on the flexibility of involved parties capable of solving situations and complications that have arisen. If nothing else, may this article at least help you to understand better those who stand on the other bank.